As the Cannabis Sativa plant develops, a cascade of events or changes occur, creating, activating and evolving over 500 compounds. Known as biosynthesis*, this process is responsible for producing a variety of plant-derived cannabinoids, or PhytoCannabinoids.

*Biosynthesis - The production of complex molecules within living organisms or cells.

While over 100 PhytoCannabinoids have been identified, including the popular Delta 9 THC and CBD, all of these compounds start with a common Cannabinoid acid called CBGA, or Cannabigerolic acid.

CBGA, referred to as the “Mother” cannabinoid, is a non-psychoactive precursor to the three main branches of cannabinoids stem from. Tetrahydrocannabinolic acid (THCA), Cannabidiolic acid (CBDA), and Cannabichromenic acid (CBCA) are all acidic cannabinoids found in raw, fresh plant material which are differentiated by different synthase enzymes from CBGA.

The three branches continue then convert, via either oxidation or decarboxylation (heated), into other acidic (CBNA), or “Neutral” phytocannabinoids such as THC (Delta 9), CBD, CBN, CBG and more.

CBGVA (Cannabigerovarinic acid) also acts as a stem or “Mother” cannabinoid to the lesser known and recognized “V” family of cannabinoids.. Like CBGA, CBGVA converts via enzymes to CBDVA, THCVA, CBCVA and then to CBDV, THCV, and CBCV as result of decarboxylation. 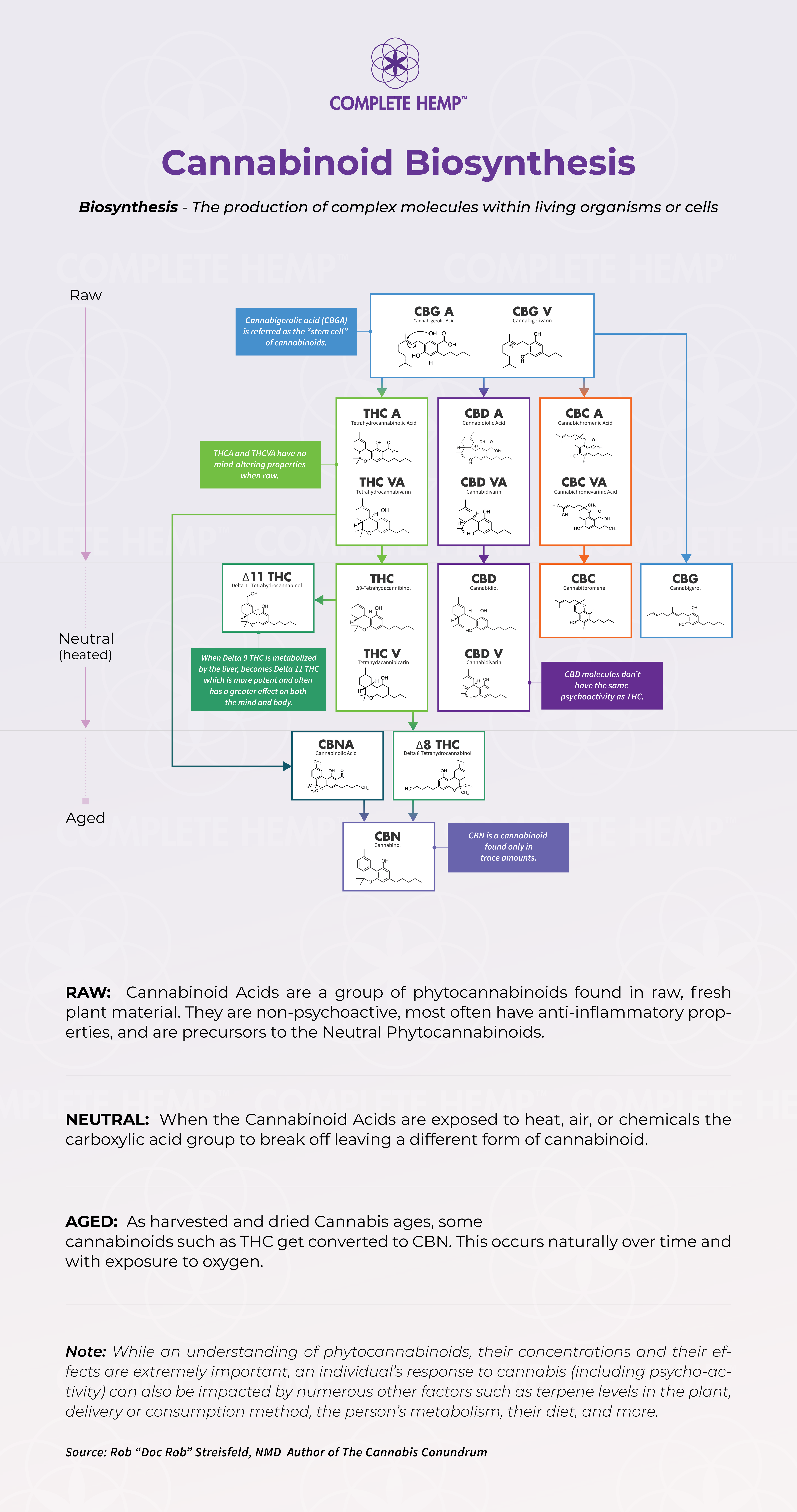 Decarboxylation occurs when the carboxylic acid group spontaneously breaks off from the cannabinoid structure, which happens gradually over time or more rapidly if exposed to heat or other processes such as CO2 Extraction. We often speak of “activating” the cannabinoids but they are not inactive before decarboxylation; they have different properties and effects. Research is showing multiple benefits from the acid forms, which unlike the neutral cannabinoids, do not illicit any mind-altering effects.

When Cannabis is exposed to air, heat, or is just old material, the THC(Delta 9) goes thru a process called oxidation, and is converted to Cannabinol (CBN).

While not found naturally in the Cannabis Sativa plant, ingesting Delta 9 THC via edibles creates a different, lesser known cannabinoid, Delta 11 THC (11-hydroxy-THC). When Delta 9 THC is metabolized by the liver, it becomes Delta 11 THC, which is more potent and often has a greater effect on both the mind and body.

Final note: While an understanding of phytocannabinoids, their concentrations and their effects are extremely important, an individual’s response to cannabis (including psycho-activity) can also be impacted by numerous other factors such as terpene levels in the plant, delivery or consumption method, the person’s metabolism, their diet, and more.