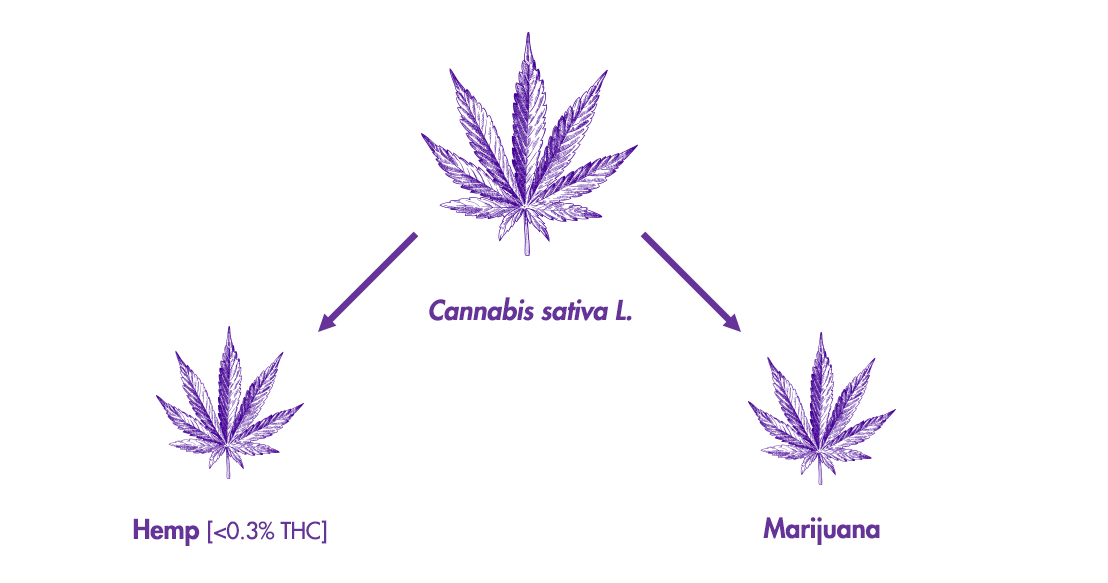 Hemp and marijuana come from the same cannabis species, but are grown for different purposes. Hemp also called industrial hemp is one of the oldest plants known to man, dating back to 8000 BC. The plant itself is typically tall and thin and cultivated to produce food, oils, paper, other textiles, and high CBD extractions.

Marijuana plants, on the other hand, are bred for their psychotropic properties. The cannabis plant species, which includes industrial hemp, contains 60 known cannabinoid compounds. The levels of THC in cannabis are what legally distinguish which plants are considered industrial hemp and which are considered marijuana. High levels of THC (3 -15%) the cannabinoid commonly associated with the plant’s psychoactive properties, is found in higher concentrations in marijuana plants, whereas industrial hemp status is given to cannabis plants with THC levels less than .3%.Cannabinoid ratios differ from each cannabis strain. Whereas the marijuana strain in Girl Scout Cookies has high levels of CBG, the Sativa strain Durban Poison is richer in THCV. Neither strain is necessarily better, they simply differ in cannabinoid ratios. Similarly, hemp is a cannabis strain with typically higher concentrations of CBD, CBG, CBC and sometimes THCV but will always have low levels of THC.

The CBD molecule when isolated is the same whether it was derived from marijuana or hemp. Thus, the argument of the CBD molecule being different in marijuana and hemp is a misconception. Franjo Grotenhermen of the International Association of Cannabinoid Medicines famously declared, "CBD is CBD. The human body does not care where the molecule comes from." To better understand this, think of drinking water from the faucet of your sink or a filtered water bottle. Although the purity of the water might be different, the H2O molecule is consistent.Similar to the above analogy, what is arguably relevant in the debate between hemp or marijuana extracts should be the purity and safety of the cannabidiol someone is consuming, regardless of the plant, it is derived from.