CBG is classified as a minor cannabinoid without psychoactive effects. Starting in an acidic form as CBGA, or cannabigerolic acid, it can transform into its neutral form, CBG.

These chemical transformations are common in botany and biology. Molecules morph through certain conditions, like heat, light, or oxidation. Chemicals transform into new chemicals, which then transform again. The cycle can go on for many iterations as the chemical structure shifts over time.

It basically starts with just CBGA. Under the right conditions, it then morphs into either CBG or one of the varied acidic precursors that precede cannabinoids such as THCA, CBDA, and CBCA.

The chemicals, once transformed into acidic precursors, go on to become potent forms of cannabinoids such as THC and CBD. With age, these chemicals can then shift again, turning cannabinoids, like THC, into other cannabinoids like CBN and Delta-8 THC.

CBGA: Mother of All Cannabinoids

CBGA earned the title “The Mother of Cannabinoids” or "The Stem Cell of Cannibinoids" because it's the precursor to every cannabinoid in the plant. The entire class of CBG related cannabinoids is also sometimes referred to this way. Although for some, CBGA is the mother of cannabinoids and CBG in its neutral form is the “princess of Hemp” as it’s the only non-acidic cannabinoid to form directly from CBGA.

For decades, researchers have been investigating the potential benefits of the hemp plant. There had been studies identifying individual plant elements and investigating their possible effects even before the discovery of an entire regulatory system influenced by plant-based cannabinoids in the early 1990s.

Eventually, a considerable amount of research had focused on identifying specific pathways impacted by individual cannabinoids once it was clear that our bodies are inherently wired to respond to hemp and the cannabinoids it contains. Early cannabinoids research was mainly focused on the potential wellness benefits of CBD and THC, but now the emphasis has evolved.

There are more than 118 other less concentrated cannabinoids found in industrial hemp, and researchers today have begun to focus on some of them. While some are found in such small amounts, they are difficult to isolate, some show considerable potential when it comes to health and wellness. One of the lesser-known cannabinoids that are drawing significant attention is cannabigerol (CBG), or as you now know, the mother of all cannabinoids.

The Health and Wellness Potential of Plant-Based Cannabinoids

Just like CBD, CBG has been found to have substantial therapeutic potential. Its health and wellness potential is explained by how hemp-based cannabinoids interact with key receptors throughout your body, the receptors of your endocannabinoid system (ECS). Hemp-based cannabinoids mimic the effects of the ECS messengers produced in your body to relay urgent messages to your ECS receptors (CB1 and CB2). CBD works indirectly to these receptors, but CBG binds directly.

There are many processes influenced by the interaction between the messengers and receptors of your endocannabinoid system. These include:

This interaction between messengers and receptors of your endocannabinoid system plays an essential role in your body’s health and wellness. In fact, many hemp researchers believe that the purpose of this vital communication system is to regulate the processes required for homeostasis, which is the internal balance that all living creatures must maintain to survive.

To help maintain that balance, ECS messengers (endocannabinoids) are produced in your body as needed. Once their message is delivered to the ECS receptors, these messengers are quickly broken down by metabolic enzymes. However, the demand for these messengers can increase because of illness, injury, and environmental stress. Communication can fail if the demand exceeds the supply.

Maximizing the Potency of Broad-Spectrum CBG Products with CBD

CBD and other hemp-derived cannabinoids have been found to have health and wellness potential and if you’re thrilled about that, you’re in for a more treat with CBG. It’s known to enhance the therapeutic potential of full-spectrum and broad-spectrum CBD products through the entourage effect.

The entourage effect shows how the cannabinoids and plant terpenes produce a more significant impact when combined than what each plant element could deliver on its own. The benefit multiplying potential of the entourage effect also explains why CBD users may find products formulated with both CBG and CBD more effective than similar products made with just CBD.

Unleashing the Potential of Cannabigerol (CBG)

Looking back just a few years ago, it was not easy to find products that contained more than trace amounts of CBG at a reasonable price. Perhaps it’s because it takes about 20 times more plant material to extract CBG than it would to obtain the same amount of CBD. Harvesting crops for their CBG content was not cost-effective.

However, today, with growing consumer interest in the complementary effects of CBD and CBG, innovative CBD companies are now expanding their product line with a variety of CBG products. Hemp farmers and product manufacturers focused on the CBG content of their crops are harvesting plants before they reach full maturity, planting strains that yield more CBG, or investing in technology that maximizes CBG extraction. 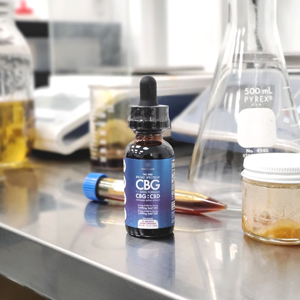 CBD and CBG are both shown to have considerable wellness potential of their own. However, when combined, each of these potentially beneficial cannabinoids enhances and complements the effects of the other.

We now offer a THC-Free Broad Spectrum 1:1 ratio 1000mg CBG:CBD 1000mg Cannabis Sativa Extract infused with US grown Organic cold-press hemp seed oil. CBG is the precursor to all cannabinoids, also called the stem cell, to some of the most prevalent cannabinoids.

Also, our THC-Free Broad Spectrum 2:1 ratio 1500mg of CBD & 750mg of CBG Cannabis Sativa Extract infused with US grown Organic cold-press hemp seed oil. CBG is the precursor to all cannabinoids, also called the stem cell, to some of the most prevalent cannabinoids.